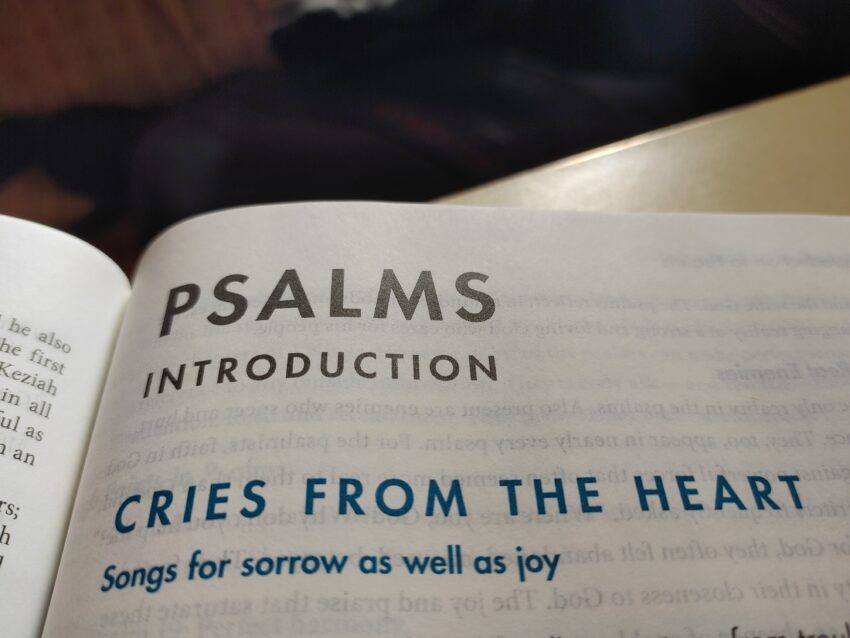 Psalms. The biblical book of songs. Likely you’ve seen or heard a few of them such as “The Lord is my shepherd, I lack nothing.” or “Yea, though I walk through the valley of the shadow of death, I will fear no evil: for thou art with me; thy rod and thy staff they comfort me.” – Psalms 23:1&4, respectively. These two verses, probably the most recognized, might seem rather straight forward and poetic by themselves, but as a whole Psalms is a difficult read. This is because the “book” of Psalms was likely five separate hymnal books that were compiled into one larger volume at a later point in time. Each chapter is self contained not relying on the surrounding chapters to make sense. In English terms, these hymnals have more in common with freestyle poetry than traditional rhythmic songs. Originally written in Hebraic prose, each chapter uses sharp transitions in tone or subject matter and elegant almost flamboyant wording, in modern terms, which was common practice at the time of their writing.

It feels sacrilegious to break a book apart and not read it as a whole, but in the case of Psalms, I don’t think they were ever meant to be read together like a book. Instead they are like songs on playlist, each chapter can be randomly selected according to mood or interest. Also like songs, that are emotional at their core, each Psalm is an emotional outcry from someone who was facing turmoil at the time, either internal or external. Over half of them are accredited to King David, a man whose life was full of turbulence with many people trying to kill him over the course of his life.

So what is my personal take on The Book of Psalms? Comparing it to other books of the Bible, I would say that the book of Job is more poetic while other Old Testament stories are more relatable and easier to follow. If we look outside the Bible, I would compare the works of Psalms to a collection of diary entries. In that regard I think the Psalms have something more to offer. Even if you don’t find every passage relatable, you get a personal glimpse into other people’s struggles. It’s a valuable experience. The best way to read Psalms is to; pick out a few to read at a time, reread over them, and think about that person’s experience. I’ll leave you with Psalms 15, a passage about the importance keeping one’s word.

(1) Lord, who may dwell in your sacred tent? Who may live on your holy mountain? (2) The one whose walk is blameless, who does what is righteous, who speaks the truth from their heart; (3) whose tongue utters no slander, who does no wrong to a neighbor, and cast no slur on others; (4) who despises a vile person but honors those who fear the Lord; who keeps an oath even when it hurts, and does not change their mind; (5) who lends money to the poor without interest; who does not accept a bribe against the innocent. Whoever does these things will never be shaken.